H.E.R. Joins the Cast of’ ‘The Color Purple’ Movie Musical

According to The Hollywood Reporter, H.E.R. has been cast in The Color Purple musical feature from Warner Bros. Studios.  She will portray the character of Squeak, a waitress-turned-aspiring singer who was played by Rae Dawn Chong in the original 1985 film.

The musical will be produced by Oprah Winfrey and Steven Spielberg; the two starred in 1985’s The Color Purple film, as actor and director. Alice Walker, Rebecca Walker, Kristie Macosko Krieger, Carla Gardini, and Mara Jacobs are also executive producing. 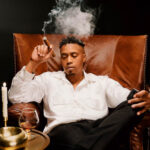 50 Cent to Star in ‘The Expendables’ Movie