Filmed at Catch LA in California, Nas is seen enjoying an all white-clad brunch alongside friends. Lil Rel stands up to propose a toast to Nas, in which he says, “To one of the O.G.’s in the game, Nas. Man, lyricist, poet, a prophet, fam, you did it the right way, bro.

Check the video below. The Return Of The 2021 Met Gala: Red Carpet Favorites 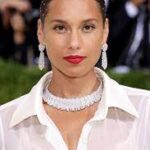