According to Detroit Daily News, Eminem is preparing to open a resturant called Mom’s Spaghetti.

The restuarant is inspired by his 2002 hit “Lose Yourself”: “His palms are sweaty, knees weak, arms are heavy,” he raps in the first verse. “There’s vomit on his sweater already, mom’s spaghetti.”

Set to open on September 29th in Downtown Detroit, the restaurant offers simple dishes like the s’ghetti sandwich and spaghetti and meatballs.

A commercial for the eatery has began airing on Detroit TV stations promoting the grand opening. The 30-second spot provides a glimpse of the new restaurant and shows Eminem holding the fare while standing over the Detroit skyline. The ad also directs viewers to call 313-888-8388, which leads to an information recording. 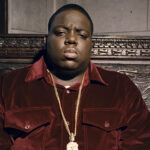 The Notorious B.I.G. Biography, ‘It Was All A Dream,’ To Be Released For 50th Birthday