Lil Yachty announced that he now has his own Reese’s Puffs cereal box. The rapper revealed his latest collaboration to his social media followers stating, “I’ve done a lot of things in my career, but this is one I’m probably most proud of..,” in a tweet that revealed the collab.

The limited-edition cereal box, designed by the artist, will soon be available at grocery stores across the U.S. and Canada for $3.99 USD.

“Growing up, Reese’s Puffs was the cereal that was always in the house. And as far as I can remember the commercials just always felt, like, more in tune with the culture I grew up around,” the Atlanta artist told Hypebeast. “And of course I didn’t ever think I’d have my own box. But growing up and it being a cereal that was always in house — a cereal we ate — is like a super cool and crazy accomplishment. Arguably the craziest thing I’ve done, and I’ve done so many things in my career… [but] this is probably the coolest thing I’ve done thus far.”

General Mills’ senior marketing communications manager Mindy Murray thinks Lil Yachty was a perfect choice for this collaboration. “Lil Yachty is an innovative creator who also happens to be a big fan of Reese’s Puffs,” Murray says in a statement. “He brought so much of his signature creativity to this collaboration, we knew our fans would be excited to see his design on the front of our cereal boxes.” 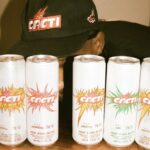