According to Billboard,  both of Kanye West’s Donda album listening event in Atlanta grossed between $1.5 million and $2.7 million each for West. 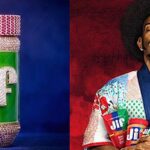