Beyoncé announced her and Jay-Z will work with Tiffany & Co. as brand ambassadors in her recent interview with Harper’s BAZAAR magazine. Tiffany and Co. has recently been acquired by LVMH in January 2021 and under new management the company will shifted its marketing strategy, placing a heavier emphasis on social media and influential brand partners.

According to WWD, the ad entitled “About Love” will mark the first time the two music superstars will appear together in a campaign and the first time the famous Tiffany Diamond — with its 128.54 carats and 82 facets — will feature in one. The ad also features a Basquiat painting, dating from 1982 and titled “Equals Pi,”.

The ad spot is directed by Emmanuel Adjei, the co-director and creative collaborator of Beyoncé’s acclaimed musical film “Black Is King.” The viral video shows Beyoncé debuting her own interpretation and arrangement of the famous song from the 1961 movie “Breakfast at Tiffany’s” as Jay-Z filmed her with a Super 8 camera.

The print side of the campaign will first launch in early September in the U.K. An accompanying video element, meanwhile, is set to debut on Sept. 15 via the official Tiffany site and a selection of in-person locales. Takeover-style displays are also slated for later this year in Times Square, among other locations.

The partnership between the Tiffany brand and the Carters also includes a commitment from the brand of $2 million toward scholarships and other programs focused on Historically Black Colleges and Universities. 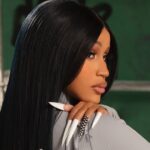 Cardi B to Release “Let Me Be...In My World” Reebok Collection