Pusha-T collabs with Arby’s for a diss track of sorts aimed at McDonald’s, home of the Filet-O-Fish.

“How dare you sell a square fish, asking us to trust it?” is part of the lyrics among some of the delivered jabs.

“I am solely responsible for the ’I’m Lovin‘ It’ swag and the jingle of that company,” Pusha told Rolling Stone. “That’s just real. I am the reason. Now I gotta crush it.”

He continued, “I did it at a very young age at a very young time in my career where I wasn’t asking for as much money and ownership. It’s something that’s always dug at me later in life like, ‘Dammit, I was a part of this and I should have more stake.’ It was like half a million or a million dollars for me and my brother — but that’s peanuts for as long as that’s been running. I had to get that energy off me, and this [ad] was the perfect way to get that energy like, ‘You know what? I’m over it.’”

Mcdonald’s commercial with Kayne West last month was probably the spark that ignited the newest debate of fast-food feuds.

Check out the diss track below. 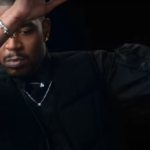